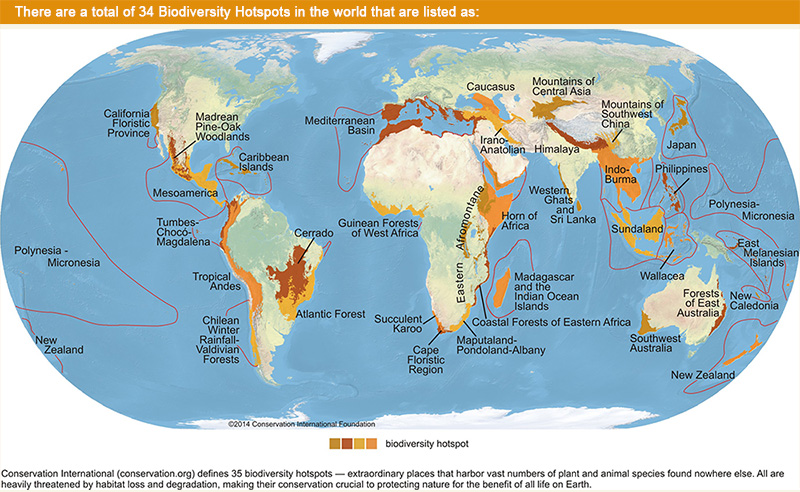 BIODIVERSITY, in general terms, comprises the variability of all life forms present on the Earth including all the fauna and flora species present on the planet. To be more specific, it denotes the total species present in a specific ecosystem. All the species on Earth compete with each other for ensuring their survival while living together in the same ecosystem with each other. It has been estimated that about 8.7 million species of flora and fauna are currently in existence on the Planet Earth of which only 1.2 million species have been discovered so far and still a lot more is yet to be discovered as many of the Earth’s rich biodiversity areas are still unexplored.

These places serve as the plethora of fauna and flora species including some of the endemic species because of the geologic formations and also exhibiting exceptional scientific interest. These designated areas account for about 2.3% of the Earth’s surface accounting for a total of 35% of the global ecosystem services. The hotspots provide crucial ecosystem services for human life, such as the provision of clean water, pollination and climate regulation besides supporting rich biodiversity. They also serve as a home for several ‘ENDEMIC SPECIES’ that are confined to a specific ecological spot and are not found anywhere else on the planet. These are the Native species of the particular area. For any area to be considered as a Biodiversity Hotspot, it must meet the following two criteria:

There are a total of 34 Biodiversity Hotspots in the World that are listed as:

As the world continues to grow at a very fast pace, the Biodiversity hotspots around the globe are facing a large phase of extinction and a rapid decrease in its endemic and threatened species present in its ecological area. It is causing serious habitat loss which in turn, is affecting the global population of species present on the Earth. The biggest killers of wildlife globally are unsustainable hunting and harvesting. Factors, such as pollution, exploitation of land, invasive species, deforestation, and climate change are some of the other major causes of habitat loss and destruction at these hotspots.

In order to protect our planet, we can start by making some small changes in our daily lives. Taking action by recycling, picking up trash, being conservative with our water consumption, and limiting pollution emission by reducing our dependence on vehicles and promoting more of walking, biking, or taking public transportation are the ways by which we could help the environment to heal itself. We can also come up with our own ideas, as we educate ourselves on biodiversity by reading about different places and living things. The more scientific way of conserving biodiversity is by adopting two ways:-

In-situ Conservation– It is the method of conservation of genetic resources in natural populations and habitats of plant or animal species. It involves the reduction of biotic pressure rehabilitation and helps in the multiplication of the species through the process of evolution and adaptation. The faunal species are more adaptable to this kind of conservation process as it supports the species mobility with a larger habitat area.

Ex-situ Conservation– It is the process of conservation of living organisms outside of their natural habitat through genetic conservation including both captive propagation of species and their eventual release into the natural or restored ecosystem. In this conservation process, artificial conditions are created to make their habitat almost like a natural habitat. This method enhances the probability of reproductive success for endangered species. The faunal species, in this method, have less mobility owing to the smaller habitat area.

To ensure the survival of highly impacted species with little or no access to refuges, “active threat management” is needed to open enough viable habitats for the threatened and endemic species of the area to survive. Conservation in the hotspots promotes sustainable management of these essential natural resources and supports economic growth, which also reduces drivers of violent conflict. Some global organizations like Conservation International, the World Wide Fund for Nature, Alliance for Zero Extinction, and the Critical Ecosystem Partnership Fund have implemented efforts to conserve different biodiversity hotspots.

These Biodiversity Hotspots are the only measure for preventing the further extinction and wiping off of the biodiversity from the planet as these areas poses as a viable spots for Biodiversity conservation and are some rich areas across the world housing the plethora of the faunal and floral species and hence saving and conserving these Biodiversity Hotspots is an absolute necessity essential for the survival and proper functioning of the earth’s cycle.

Also Read: What is Global Warming, Causes and Effects

4 thoughts on “Biodiversity Hotspots in the World”